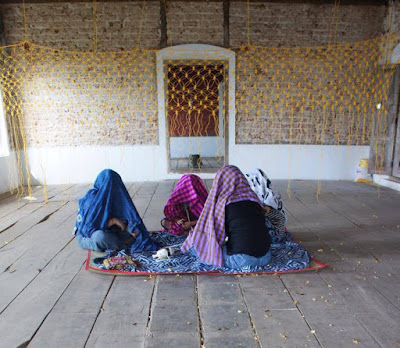 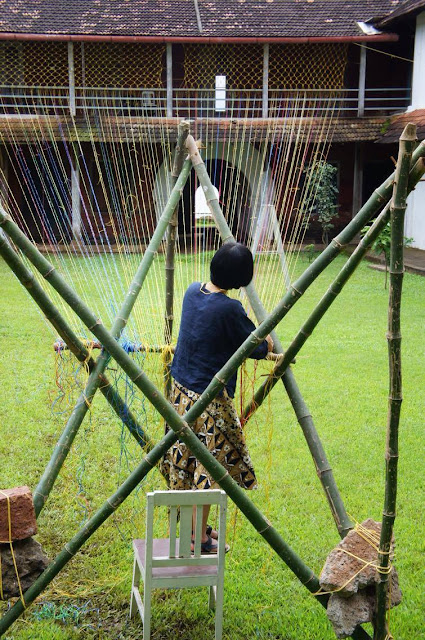 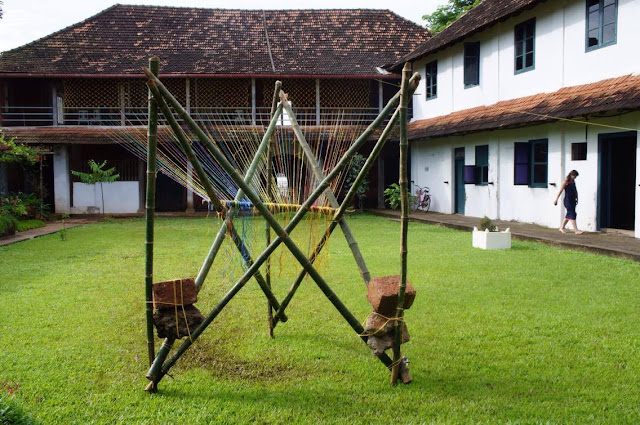 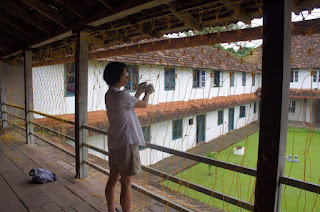 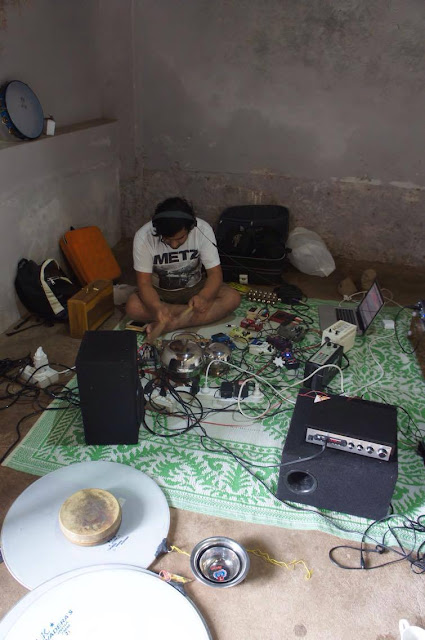 SURFACE. LOCATION
Collaged in a musique concrete style using melodic sketches with acoustic and electronic instruments, metal percussion dissections and field recordings from Fort Kochi, surface.location is a half hour sound portrait that reveals the psycho-geographic quality that inspired Shoeb during his stay at Kochiair.


Im/modesty is a 60 minute multi-speaker audio installation that diffuses sound elements from the extended composition of the same name. Using a three part text inspired by the cultural barriers people from the Indian sub-continent face when exploring sexuality, be it on a personal level or in the public eye, as a narrative for the work, the installation interweave these voices with recordings of Indian electronic instruments, harmonium and percussion as well as field sounds recorded in southern India and Bangladesh that will be constructed to be played in loop through small scale speakers. 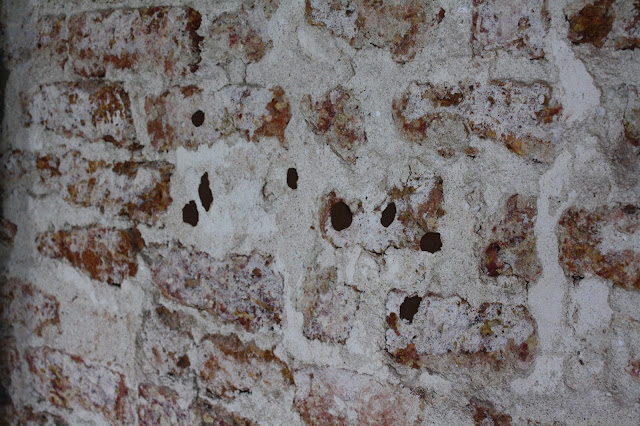 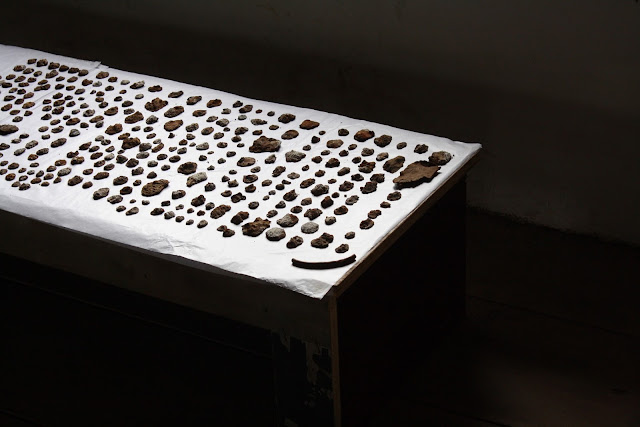 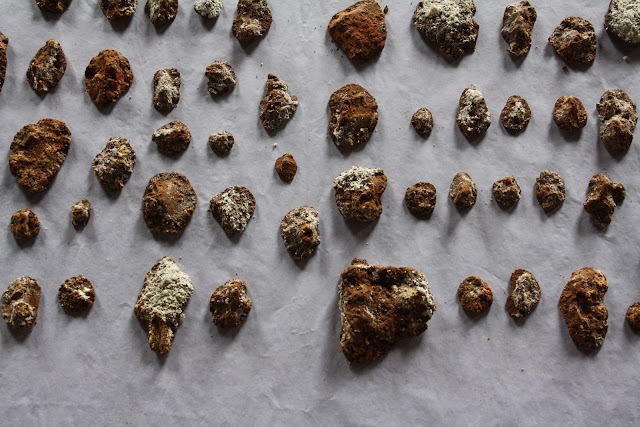 Naasicaa Larsen
Everything is waiting for you 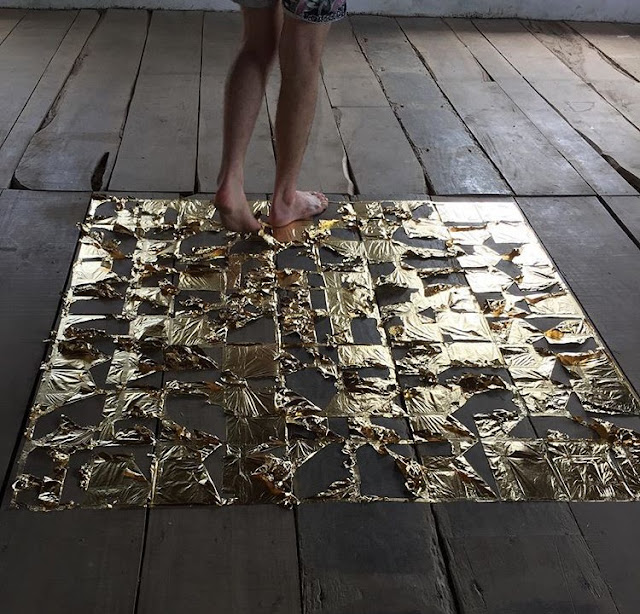 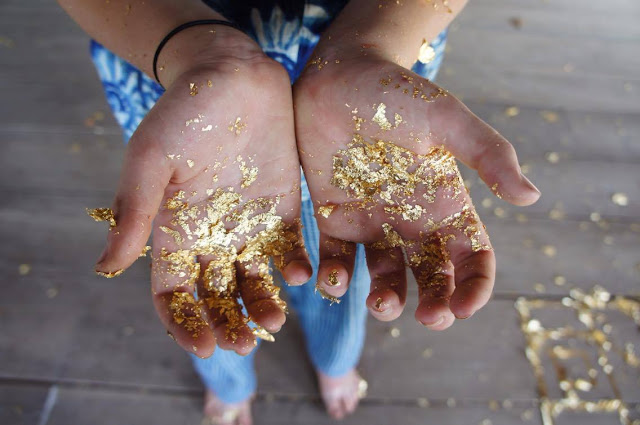 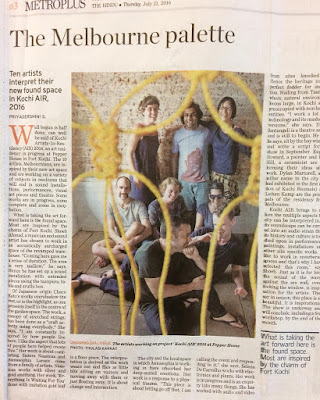 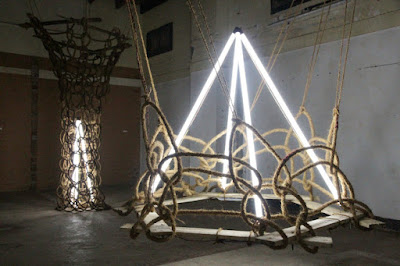 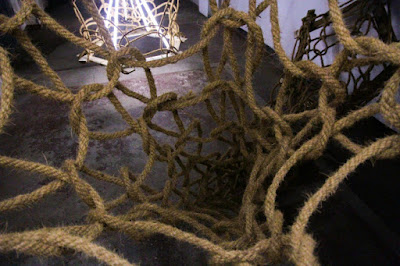 BIG DIPPER is a kinetic light sculpture combining symbolic elements of biology and physics; the helix of DNA and the waveform of light. Named after a constellation the sculpture alludes to the primordial origins of life from stars, the kilns of the universe.


found ceramic pots, wiring, lights, speakers, cotton, television, DVD with sound
This work was installed as part of an exhibition at the culmination of the Kochi Artist-in-Residency program at Pepperhouse Studios in Kochi, India (KOCHI A.I.R/Pepperhouse Residency). Fellow artists from Australia Meagan Streader and Michael Candy exhibited works in the adjacent warehouse spaces within the Pepperhouse grounds. Predominantly a sound-based work, it was installed during the months leading up the second Kochi-Muzuris Biennale. The following text was mounted in the space as accompanying information.
“Tanpura Study #2 (sa, ma and pa in C#) is a spatial musical exploration of the Indian classical instrument, the tanpura. Three separate recordings of a tanpura playing the notes shadja, madhyam and pancham in the sargam system of Indian classical (do, fa and so in the European solfège system) and in C# have been taken and then paired with three pure sine wave tones of identical frequencies. The six recordings are looped endlessly through speakers contained within each of the locally-sourced ceramic pots, which act as resonating chambers. As each recording is of a slightly different length, the tones, all played simultaneously, create a form of generative music - music made autonomously by the interaction of different elements within a system. The ways in which the frequencies mix in the room relative to the air pressure and the placement of the listener create an explorative sonic environment, as the listener is free to interact with the timbre and surface of the tanpura as it is juxtaposed with the sounds of the sine waves – the basis of all sound.
In the centre of the room, a monitor is playing slow pulsations of the sine bass tone of 69.3hz, or C# - the tonic, or shruti as it is spoken of the Carnatic tradition. The inclusion of this tone is intended to reflect the rich emphasis and complexity that shruti is given in Indian Classical, and also to hopefully evoke something akin to Nāda yoga, or sound yoga, and it’s goal to achieve a union with anahata - the inner sound of the heart.

Sound based installation combining archery and exploded drum kit .
Developed with the Slow Art Collective this work came out of exploring
the world of diy weapon making that our children where developing, how this
has been influenced by themes of dystopian societal collapse in popular culture
(Hunger Games, Princess Mononoke) and how this related to our own interest
in survivalist tropes, upcycling and the use of play as a subversive form of pedagogy.
Replacing the traditional target with various drum kit pieces amplified and triggering
samples from localised sources also turned the work into a form of improvised experimental
music group as opposed to a purely competitive action. 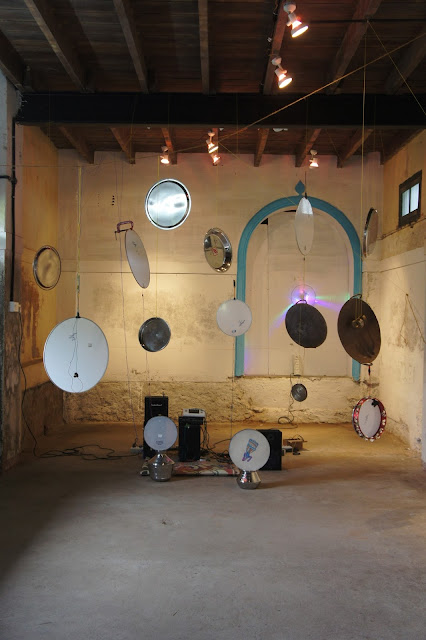 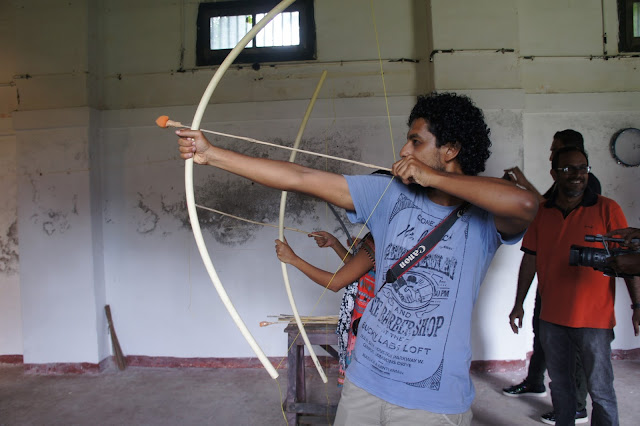 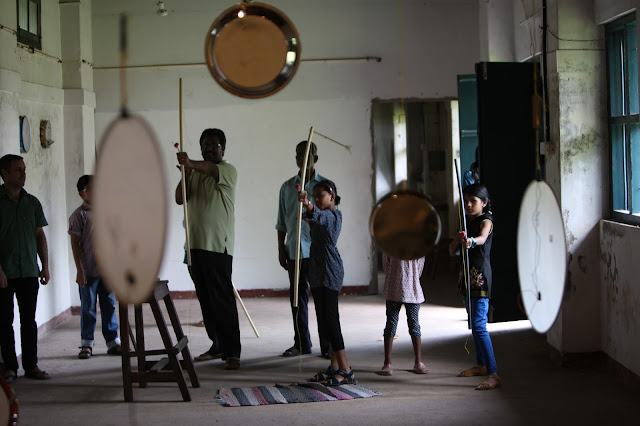 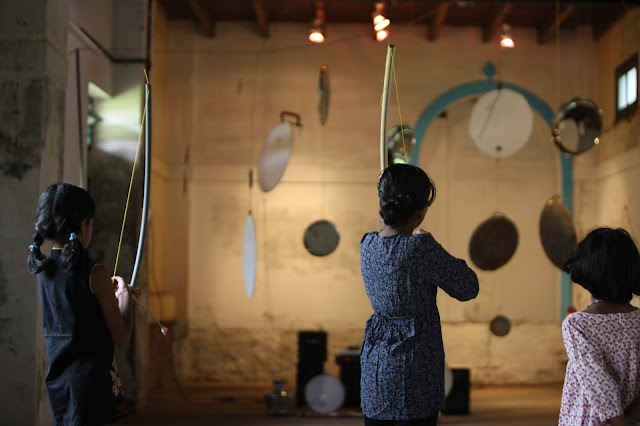 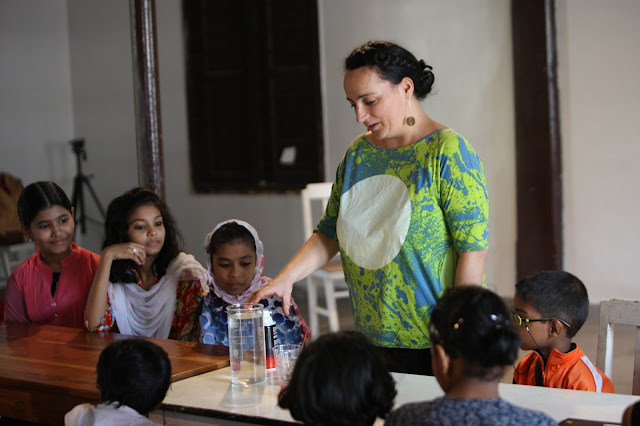 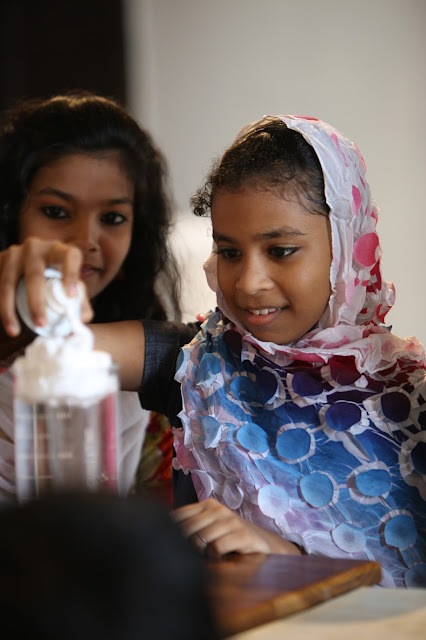 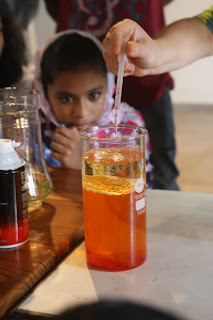 Exploring scientific processes and materials for their painterly and sculptural qualities, Lichen Kelp introduced the children to a series of experiments using domestic ingredients to create otherworldly landscapes, liquid paintings and edible explosions.


By combining household ingredients and flowers along with principles of colour chemistry, and chemical reactions in
a series of performances, photographs and workshops, Kelp's process based works playfully explore new possibilities for future gender roles in art and science as well as disrupting our notions of beauty and nature. 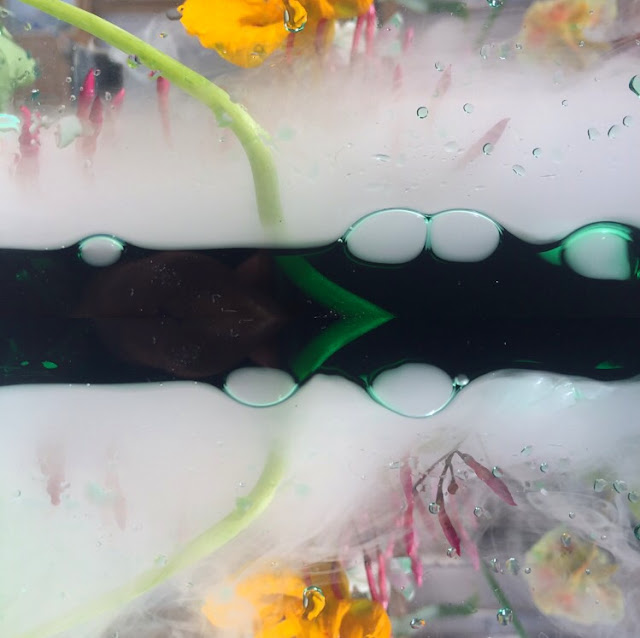 Kochi Artist in Residency will commence in late June and continue until late July 2016.
Residencies are for the full 5 week period.

Accommodation is in the heritage building that houses Secret Garden Homestay.

This accomodation fee is the main expenditure for participants as the cost of the studio is being covered by the hosts and the price of food, transport and materials is generally low. 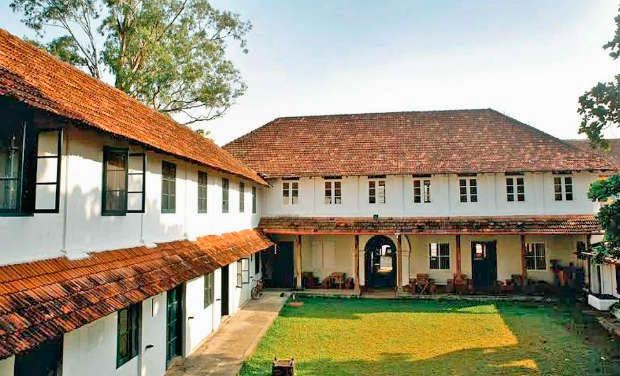 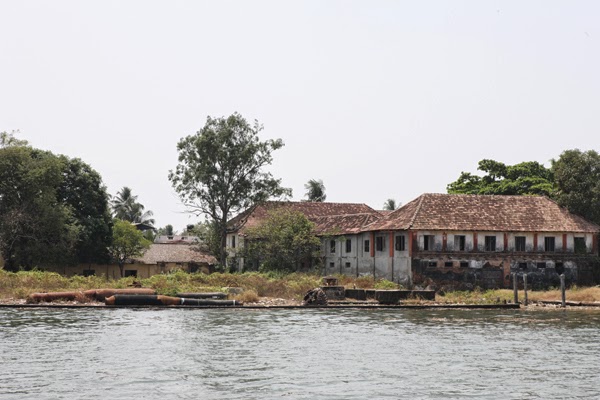 Studios will be located in an old pepper factory which has been renovated and is situated on the water. The working spaces allocated for artists are huge.
Pepperhouse was one of the main sites for the 2012 Kochi Muziris Biennale and was secured for us with the assistance of the Biennale organisers. 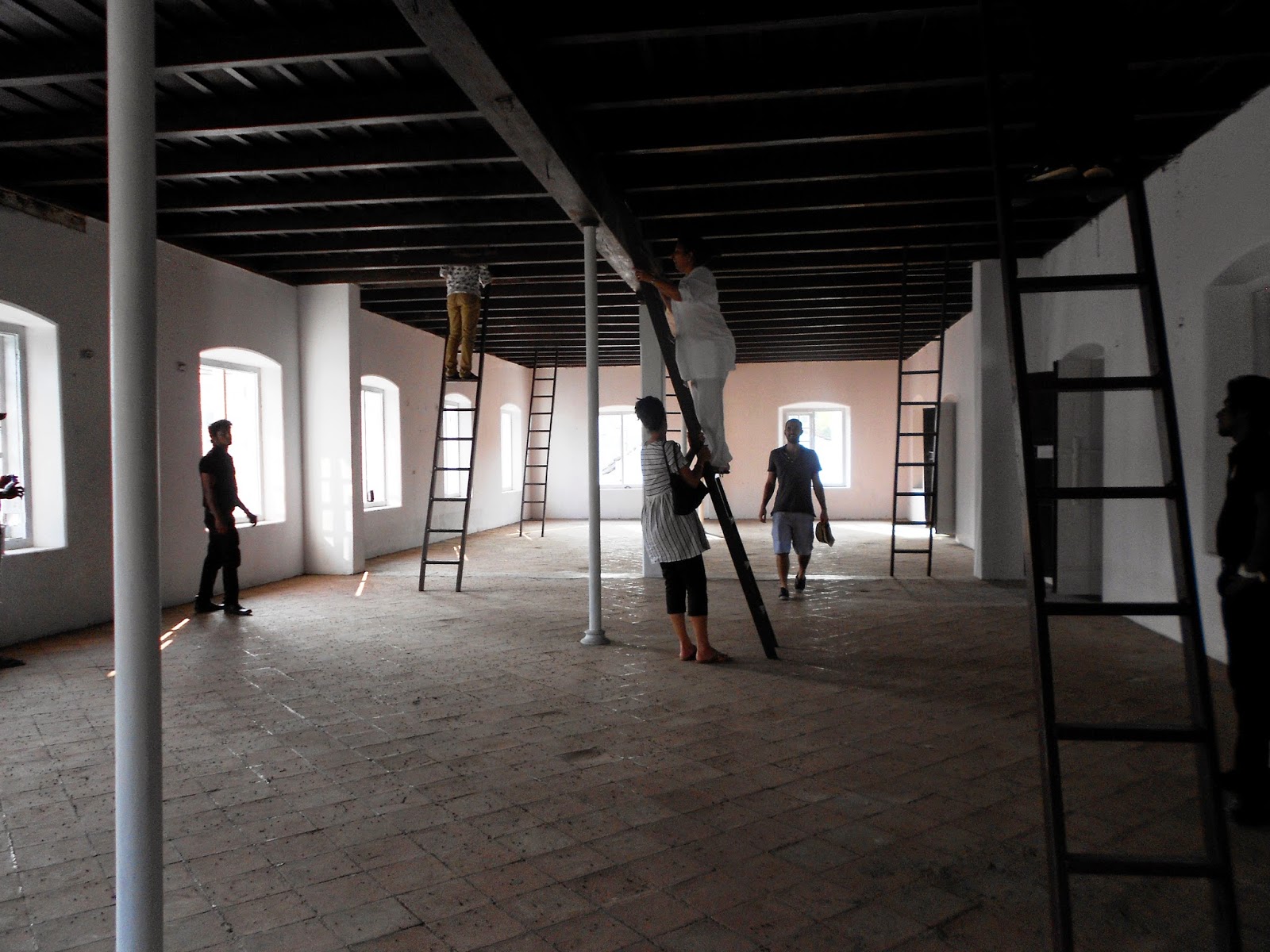 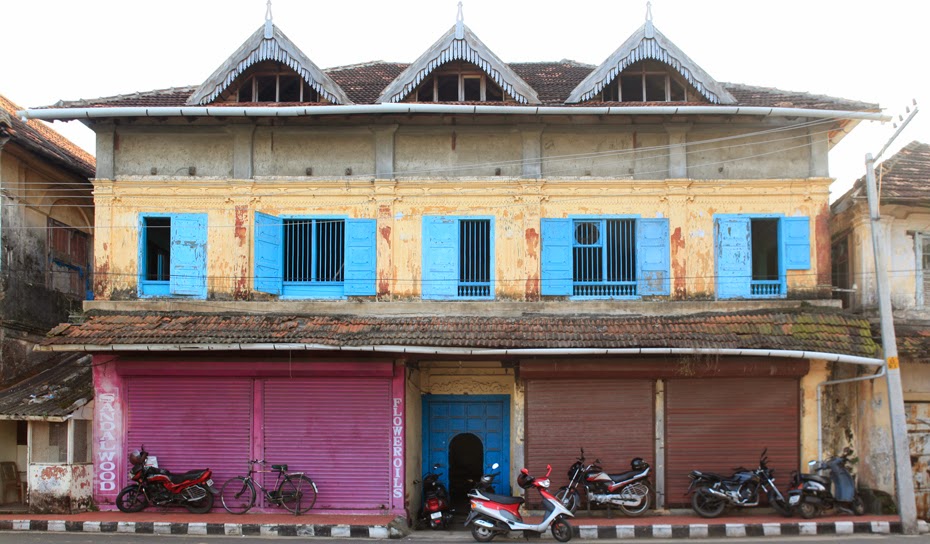 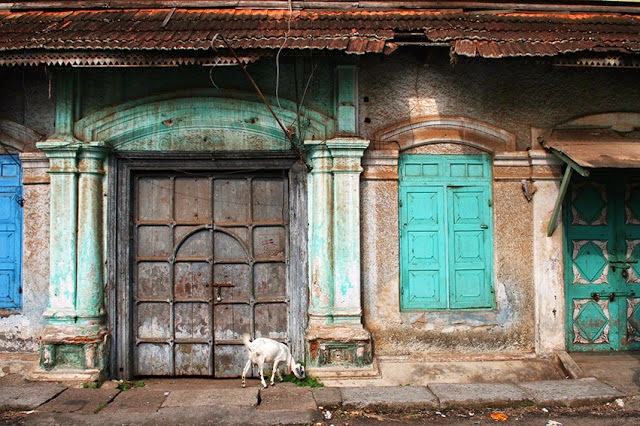 The historic two story Pepper House building is situated in the spice quarter which has been operating for centuries and is filled with incredible old crumbling Portuguese warehouses known as Godowns - an Indian term for dockside warehouses used for storing goods to be transported by sea.

The host is KOCHI A.I.R. managed by

KOCHI A.I.R. are liaising with the production team behind the Kochi Muziris Biennale, to create a residency
program for artists which will be self initiated, open ended and responsive with an emphasis on engaging the local community, these may include but aren't limited to; artists talks, workshops, musical collaborations, street based performance and/or interactive installations.

The scope of the inaugural 2012 Kochi Muziris Biennale was wide reaching and ensured this complex and cosmopolitan town's position as an exciting center for the arts. With a shift in focus away from the concerns of the commercial art world this event sought to reposition the role of the arts as a launching pad for cultural, ecological and social regeneration. This residency program aims to continue this legacy and provide more ongoing community access to the arts.

The hosts welcome artists from all backgrounds and disciplines and their partners and children. 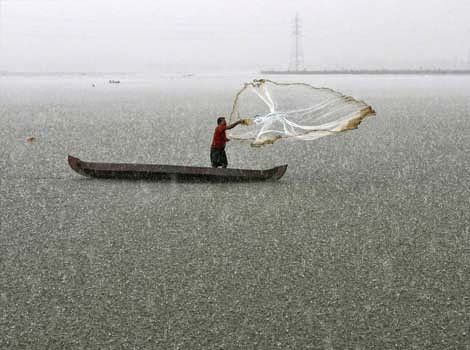 Kochi A.I.R. have been given access to the accommodation at Secret Garden Homestay during the off peak season. This means we have heavily discounted rooms available to offer artists. Please be aware that this is Monsoon season in Kochi. Rising temperatures followed by bouts of heavy rain, thunder and lightening are common during the monsoon months in Kochi.

Posted by sunday morning designs at 9:25 PM No comments: 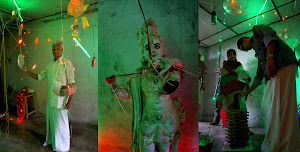